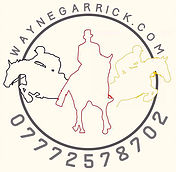 I specialise in difficult horses and believe that my keep it simple and common sense approach works well with horses with a difficult past, I have backed some very difficult horses, some of which have gone out into the “real world” and have qualified for regionals in dressage and other disciplines. It is a gift that I have and one that I want to share as I think many horses are written off without a proper chance.

I believe that a happy atmosphere makes for a happy horse, that has been my goal and finally, I have found it at Romers Common. With a superb range of facilities and amazing hacking I can offer your horse “variety” which I think is key. I was born and bred in Germany and moved to England (the Lake District) when I was eight. I was bullied quite badly at school, which is when I discovered horses. The bigger boys wouldn’t go near them! Next thing I knew I had been bitten by the bug and was at the stables 24/7. Aged 14, I bought my first pony with my saved up paper round money. She was a 14.2hh Welsh cob called Queenie. I never realised how appropriate that name was until later in life!!!!! I had been scared to leave the ground in the past but with Queenie I tackled gates, hedges and anything that was stationary. Tragically, she broke her leg in the field whilst she was in foal so I lost both my babes. I then got Ryan, my horse of a lifetime (aka “U No The One”). We did lots of Pony Club stuff and Riding Club teams, then I moved down to the Cotswolds with the beast and we started doing proper eventing. I worked for The Honourable Teresa Stopford-Sackville as her second rider. ​After a short stint there I moved on to work for Mr and Mrs White to do their hunters. Mrs White had a fondness for eventers so I started to event a youngster for her. One thing led to another and seven years later, in 2008, I had completed my first 3* event on Cornish Murphy at Kreuth, thanks to the help and patience of Mrs White and all the others that had helped me on my journey. Too many to name but you all know who you are! 2009 was a year of amazing highs and lows including Bramham on Cornish Murphy and Blenheim on Flyte. I was offered the opportunity to work with international event trainer, Trudi Robinson, at Moor Farm in Gloucestershire. I stayed with Trudi for nearly three years producing youngsters and competing at eventing and dressage which was an invaluable experience. ​In 2012, however, I made the decision to move on and start doing the work for myself as apposed to being bucked off for someone elses gain. So I branched out on my own and took up residence at a yard near Ross-on-Wye. This was a big step and one that definately drove me in the direction to having my own business. I had a short but wonderful spell at Tack Farm Event centre with their excellent facilities and have since relocated to my ideal, which is having yard and house just a stones throw from each other. ​So now I am located in a wonderful village called Bockleton which is just outside Tenbury Wells. It is a great location with superb hacking and canter tracks for fittening and for the babies to learn life skills. 8 acres of grazing and a small private yard which allows me to concentrate on producing the horses and teaching. A super surfaced 20×40 arena with a wide range of wooden poles and wings for exciting grid work. I have some great competition horses now but I still continue to produce youngsters as I enjoy the thrill and the pride associated with being the “first” to do things on them.